Over the course of the last two blogs, we’ve looked at different building and design methods that are becoming more popular in an effort to reduce the building sector’s carbon emissions. Today, thanks in large part to architects advocating for “greener” building practices over the past decade, architect/climate experts are confident that the US building sector can become carbon neutral by 2040.

How did we get here? And what still needs to be done to make sure we achieve this goal? How can you as an architect help make sure we literally save the planet? Read on to find out.

Edward Mazria, FAIA, is the founder and CEO of the nonprofit Architecture 2030 and the recipient of the 2021 AIA Gold Medal. In a recent Architect Magazine article, he explains the reasoning behind the 2040 goal and why, despite the looming threats to the planet, there are still reasons to be optimistic.

In 2018, the United Nations’ Intergovernmental Panel on Climate Change (IPCC), a collection of the world’s leading climate scientists, issued a report that described the avoidable consequences if we (as in everyone on earth) continued our efforts to prevent just a half degree in the rise of average global temperatures (1.5°C vs 2°C).

If nothing is done and the global average temperature increases by 2°C, instead of 1.5°C,

Preventing consequences such as the ones listed above is why in 2015 the United Nations established the Paris Agreement, whose goal is “to limit global warming to well below 2, preferably to 1.5 degrees Celsius, compared to pre-industrial levels.”

Today, the planet’s average global temperature has risen by slightly more than 1°C from pre-industrial levels. In Mazria’s view, “unless the world collectively reduces current levels of global carbon emissions 50% to 65% by 2030—and completely phases them out by 2040—it will likely pass the 1.5°C warming threshold.”

These are all serious threats to our planet, but there is good news. According to the US Energy Information Administration (EIA), the country is currently on a promising track.

How We Got Here

According to Mazria, even though the U.S. has added “more than 50 billion square feet to its building stock, energy consumption in the building sector stabilized in 2005 and has not increased since.” This is in part due to architects across the nation designing more efficient buildings each year. 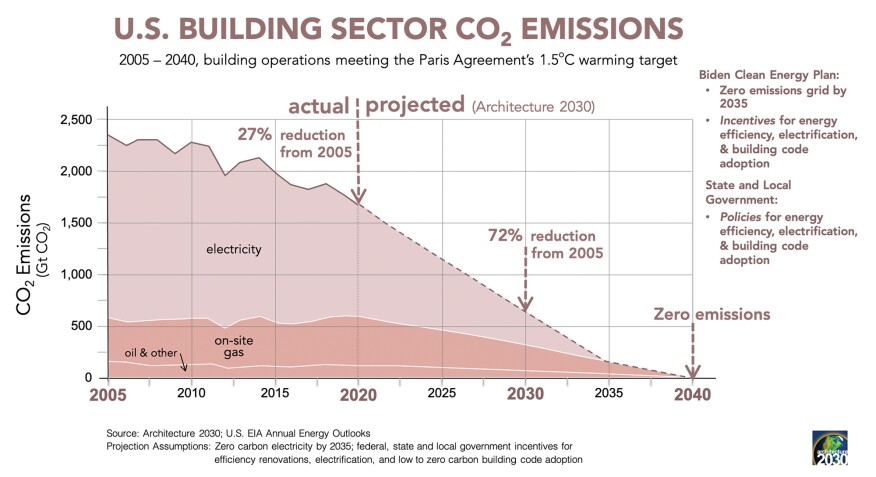 Although the US is currently trending in the right direction when it comes to carbon emissions, there is still plenty of work to be done in order to meet the 2040 goal. In the US, Mazria sees opportunity for improvement with the upcoming administration. Mainly, by rejoining the Paris Agreement, and focusing on adding “federal, state, and local government incentives and policies for energy-efficient building upgrades, electrification, and the adoption of more efficient and zero-carbon building codes federal programs that reduce carbon emissions.” Below are a few policy examples:

Recently, the International Code Council approved the addition of the “Zero Code Renewable Energy Appendix” into the 2021 International Energy Conservation Code (IECC). The American Institute of Architects (AIA) worked with Architecture 2030 to develop the appendix, which aims to empower “local communities to take action on climate change through building codes.”

The ultimate purpose of the Zero Code Appendix is to provide a national and international framework for creating zero carbon buildings. A zero carbon building is defined as one that “uses no on-site fossil fuels and produces or procures enough carbon free renewable energy to meet building operational energy consumption annually.”

If you’re interested in taking more steps to reduce carbon use in your designs, check out the Zero Code’s Implementation Guide.

The journey ahead to curbing climate disaster will not be easy. But thanks to efforts by you and your architect colleagues, there is still hope for a healthier planet for our descendants.

What are some ways you've worked carbon efficiency into your designs? Let us know on social media!

The Harvard Center for Green Buildings and Cities (CGBC) completed HouseZero, a sustainable house project designed by the architecture firm Snøhetta, that produces more energy over its life cycle than it consumes.

This renovated structure was retrofitted in a pre-1940s house in Cambridge, Massachusetts. It has hundreds of sensors to continually monitor energy performance and research data for sustainable architecture.

According to Inhabitat.com, the goal of this structure is to meet “zero-energy targets for heating and cooling, use zero electric lighting during the day, produce zero carbon emissions, and operate with 100% natural ventilation.”

HouseZero will work as a prototype and research tool for an energy-positive and efficient architecture. “By creating both a prototype and an infrastructure for long-term research, we hope to raise interest in ultra-efficient retrofits and inspire substantial shifts in the design and operating of buildings,” said Ali Malkawi, the founding director of CGBC.

AIA President Carl Elefante released a call to action letter to confront climate change. The letter opens with a direct message surmising the AIA's stance on global warming: “As an association founded to protect the health, safety, and welfare of the public, the AIA has a responsibility to speak out against climate change and to promote emissions reductions in the building sector.”

In Elefante’s statement, he lists multiple reports from the Fourth National Climate Assessment (NCA4)  and two recent United Nations reports (IPCC Report and 2018 Emissions Gap Report) to make it clear that the science is irrefutable. The earth is warming faster than anticipated and the current international community needs to do more.

Elefante calls on architects to use their design knowledge to reduce building emissions and to help explain the challenge to a wide audience.

Architects are becoming more environmentally-conscious, focusing on being more ecologically responsible and sustainable. It can be a challenge creating buildings that are aesthetically pleasing while having the lowest possible energy consumption and carbon emission production. Here are some cities around the world that have interesting green sustainable architectural projects coming out: 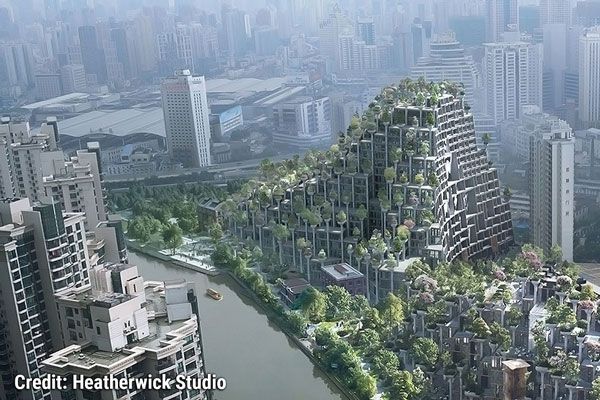 Thomas Heatherwick is leading an architectural project in Shanghai that will cover 300,000 square meters. When finished, the building will house schools, residences, retail units, offices and a hotel within its nine floors and three-story basement. According to Medium.com, it will have 400 terraces, many sets with plant beds and trees to encourage outdoor use. 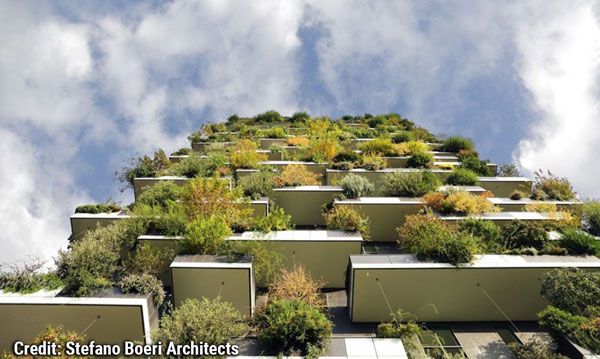 The Italian architect Stefano Boeri aims to make a vertical forest with Forêt Blanche—a 54-meter tower with stacked wood and glass cubes with planted edges. It will host residential apartments on the higher floors and offices/commercial services on the lower parts of the building. It will be covered by 2000 trees, shrubs, and plants. 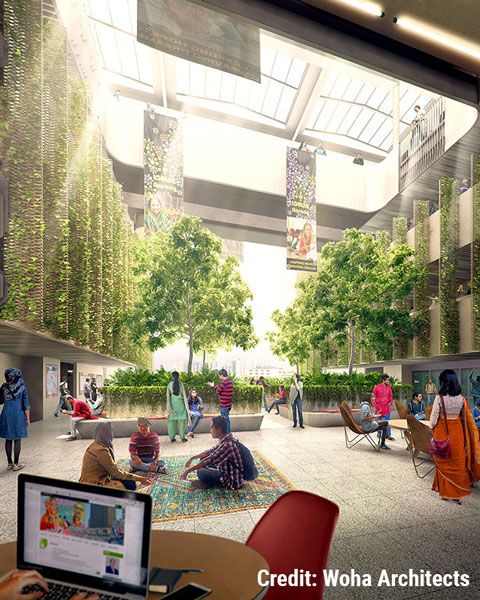 Woha Architects has plans to build an innovative and sustainable campus that demonstrates the integration of the region’s nature and architecture.  The design strategy is to create two distinct programmatic strata by floating it above the lake and revealing a campus park below. This way it minimizes the building’s footprint over the lake and maximizes space.

The city plans to create several micro-projects that merge into green inner-city corridors by moving entire streets underground banning cars from the center and create the space for new parks. The city has already proved its commitment to the environment and is trying to get the community involved by offering cash prizes for sustainable ideas from citizens.

The science community understands that the Earth is warming. Climate change is affecting sea-levels and causing more extreme weather. According to USA Today, the USA had 3 costliest natural disasters in 2018- California fire in November alone cost an estimated $16.5 billion.

The shifting climate changes the way leaders and architects think about the built environment. There are international commitments such as the Paris Agreement and the Global Covenant of Mayors that brought leaders together to act on sustainability. Leaders in U.S. states and city levels are also planning for climate impact reduction and long-term resilience.

Buildings represent 41% of the total U.S. energy output and there are opportunities to improve structures and reduce carbon emissions through Leadership in Energy and Environmental Design (LEED).

LEED uses specific credit-based strategies and strict standards to guide the building process in adding as little as possible to greenhouse gas emissions, water, and energy use. Of the 100 total points in LEED v4, it considers 35 reward climate change mitigation strategies including credits in: