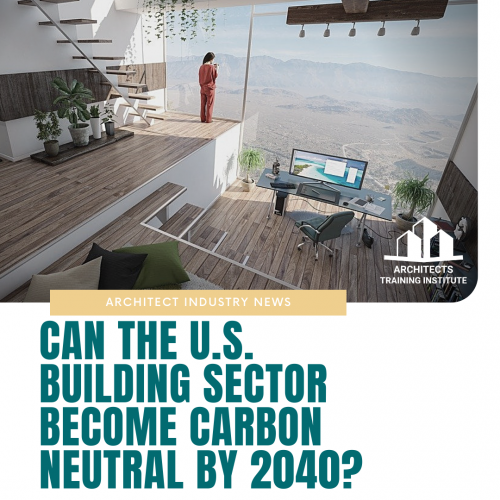 Over the course of the last two blogs, we’ve looked at different building and design methods that are becoming more popular in an effort to reduce the building sector’s carbon emissions. Today, thanks in large part to architects advocating for “greener” building practices over the past decade, architect/climate experts are confident that the US building sector can become carbon neutral by 2040.

How did we get here? And what still needs to be done to make sure we achieve this goal? How can you as an architect help make sure we literally save the planet? Read on to find out.

Edward Mazria, FAIA, is the founder and CEO of the nonprofit Architecture 2030 and the recipient of the 2021 AIA Gold Medal. In a recent Architect Magazine article, he explains the reasoning behind the 2040 goal and why, despite the looming threats to the planet, there are still reasons to be optimistic.

In 2018, the United Nations’ Intergovernmental Panel on Climate Change (IPCC), a collection of the world’s leading climate scientists, issued a report that described the avoidable consequences if we (as in everyone on earth) continued our efforts to prevent just a half degree in the rise of average global temperatures (1.5°C vs 2°C).

If nothing is done and the global average temperature increases by 2°C, instead of 1.5°C,

Preventing consequences such as the ones listed above is why in 2015 the United Nations established the Paris Agreement, whose goal is “to limit global warming to well below 2, preferably to 1.5 degrees Celsius, compared to pre-industrial levels.”

Today, the planet’s average global temperature has risen by slightly more than 1°C from pre-industrial levels. In Mazria’s view, “unless the world collectively reduces current levels of global carbon emissions 50% to 65% by 2030—and completely phases them out by 2040—it will likely pass the 1.5°C warming threshold.”

These are all serious threats to our planet, but there is good news. According to the US Energy Information Administration (EIA), the country is currently on a promising track.

How We Got Here

According to Mazria, even though the U.S. has added “more than 50 billion square feet to its building stock, energy consumption in the building sector stabilized in 2005 and has not increased since.” This is in part due to architects across the nation designing more efficient buildings each year.

Although the US is currently trending in the right direction when it comes to carbon emissions, there is still plenty of work to be done in order to meet the 2040 goal. In the US, Mazria sees opportunity for improvement with the upcoming administration. Mainly, by rejoining the Paris Agreement, and focusing on adding “federal, state, and local government incentives and policies for energy-efficient building upgrades, electrification, and the adoption of more efficient and zero-carbon building codes federal programs that reduce carbon emissions.” Below are a few policy examples:

Recently, the International Code Council approved the addition of the “Zero Code Renewable Energy Appendix” into the 2021 International Energy Conservation Code (IECC). The American Institute of Architects (AIA) worked with Architecture 2030 to develop the appendix, which aims to empower “local communities to take action on climate change through building codes.”

The ultimate purpose of the Zero Code Appendix is to provide a national and international framework for creating zero carbon buildings. A zero carbon building is defined as one that “uses no on-site fossil fuels and produces or procures enough carbon free renewable energy to meet building operational energy consumption annually.”

If you’re interested in taking more steps to reduce carbon use in your designs, check out the Zero Code’s Implementation Guide.

The journey ahead to curbing climate disaster will not be easy. But thanks to efforts by you and your architect colleagues, there is still hope for a healthier planet for our descendants.

What are some ways you’ve worked carbon efficiency into your designs? Let us know on social media!