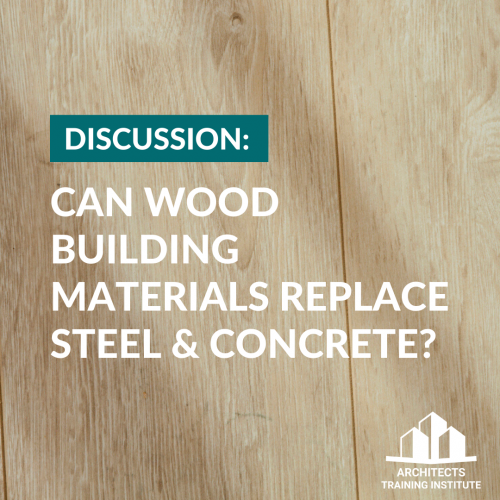 For the modern architect, designing with environmental sustainability in mind is no longer wishful thinking, but a necessity. With hundreds of cities and architecture organizations around the world committing to curbing climate change with more aggressive sustainability plans, the architect’s search for things like sustainable building materials is ongoing.

In this blog, we’re discussing one of the world’s oldest building materials: good ‘ol wood. But just how good is wood’s sustainability for larger projects? What about deforestation concerns? And should architects really consider more recent developments like cross-laminated timber the “concrete of the future?” Let’s take a look.

Before we get into the research surrounding wood’s environmental impact, here’s a quick refresher on why it’s back in the building materials conversation in the first place.

Thanks to the Industrial Revolution, steel and reinforced concrete largely replaced the natural building materials that architects had relied on for centuries; becoming the (literal) backbone for big and bold new designs.

But over the years, the constant production of modern building materials like steel and concrete has been environmentally costly. According to Architecture 2030, roughly 11% of total global greenhouse gas (GHG) emissions come from building materials and construction.

So what alternative can architects look to when trying to design sustainable buildings? Enter structural timber (aka “mass timber”). Mass timber, according to this simple explanation, is the process of “sticking pieces of soft wood — generally conifers like pine, spruce, or fir, but also sometimes deciduous species such as birch, ash, and beech — together to form larger pieces.”

One of the most popular forms of mass timber (especially in Europe) is cross-laminated timber (CLT). To create a CLT “slab,” lumber boards that have been trimmed and kiln-dried are glued together in layers, crosswise, with the grain of each layer facing against the grain of the previous layer.

Various studies have shown that mass timber products are strong, fire-resistant, save time on building sites, and most importantly, are far better for the environment than concrete or steel. Let’s break down those claims one-by-one.

In a study cited in Arch Daily, CLT delivers at minimum the “same structural strength as reinforced concrete, but it’s a material with a high degree of flexibility that has to undergo great deformations to break and collapse – unlike concrete.”

Taller mass timber structures have also proven to perform very well in “earthquake tests.” In one study done in California, the test resulted in the CLT products “performed as well as steel or concrete.”

But a beneficial difference is in the event of an earthquake, a CLT wall system allows any damaged connection devices on the building to be pulled out and replaced, often within just hours, rather than scrapping the whole structure – something not possible with steel or concrete.

According to Think Wood, a 5-ply CLT panel wall was subjected to temperatures exceeding 1,800 Fahrenheit and lasted 3 hours and 6 minutes, far more than the two-hour rating that building codes require.

During fires, exposed mass timber chars on the outside, which forms an insulating layer protecting interior wood from damage. Additionally, when the code requires mass timber to be protected with gypsum wall board, the mass timber can achieve nearly damage-free performance during a contents-fire burnout event.

You can learn more about mass timber’s fire safety in this (very) in-depth US Department of Agriculture study from 2018.

One of the biggest time-saving benefits that most pro-mass timber sources point to is prefabrication. Instead of ordering massive amounts of steel or concrete, then cutting and shaping everything to fit the design (which causes a lot of waste), mass timber products are built in a factory with pre-cut openings and lifting straps.

According to the softwood lumber industry, “Mass timber buildings are roughly 25% faster to construct than concrete buildings and require 90% less construction traffic.” The faster production and installation time also contributes to the reduced GHG emissions.

In a story for National Geographic, John Klein, an architect at MIT, said “his firm could offer the teeming cities of the 2020s a line of standardized, customizable, mid-rise apartments and office buildings, largely made of modular mass timber, that developers could order to spec like IKEA sofas.”

And finally, we arrive at the last benefit and the answer to our original question.

This entire blog was inspired by a recent Arch Daily article that poses this question: “Although we may see wood as a great building material of the future, is it possible to continue cutting down trees and using their wood while still calling it sustainable?”

Answers to this sustainability question range from a resounding “Yes!” to a begrudging “It’s better than what we’re using now.” Where everyone seems to agree, however, is on mass timber’s positive environmental impact when compared to other traditional building materials.

Last year, a team at the University of Washington attempted a full lifecycle analysis comparing a “hybrid, mid-rise, CLT commercial building” to “a reinforced concrete building with similar functional characteristics.” After tallying up all the many factors, they concluded that the CLT building represented a “26.5% reduction in global warming potential.”

Another study found that replacing other construction materials with wood could reduce 14% to 31% of global carbon dioxide emissions and 12% to 19% of global fossil fuel consumption.

But numbers like this are highly dependent on one thing: proper forest management. In the long term, large scale mass timber projects will only work in the US if suppliers make sure their products come from sources that adhere to standards set by responsible regulators like the Forest Stewardship Council (FSC).

Eduardo Souza from this Arch Daily article stresses that “as architects, it is essential that we conduct detailed research on the source of all the materials we work with. The designer must be the first to realize that not only are the quality and costs of materials important, but also where they came from and how they were extracted.”

The Sierra Club, a large environmental organization, does not oppose mass timber, but says that it cannot truly benefit the climate without first changing current forestry practices. “CLT cannot be climate-smart unless it comes from climate-smart forestry,” they said.

So right now, mass timber’s status as both environmentally positive and sustainable is a somewhat complicated “yes” with caveats.

One sign that mass timber structures may soon become more common in the US comes from changes to the 2021 International Building Code (IBC).

What do you think about designing with mass timber? You found it interesting enough to make it to the end of this blog, so let us know your thoughts on social media!