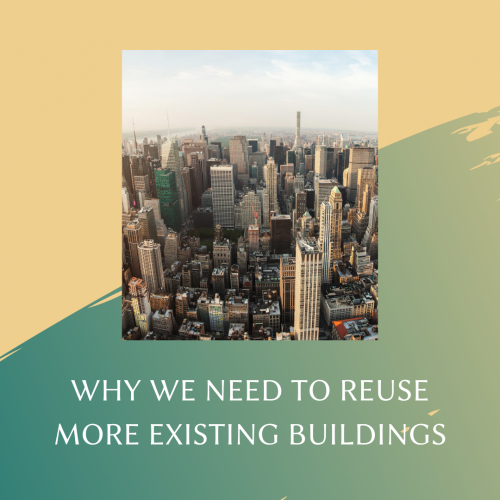 Welcome to part four of our (unintentional) “carbon conscious” blog series! In case you’ve missed out any of the past excitement, check out our other blogs about mass timber, modular architecture, and the possibility of a carbon neutral building sector in the near future.

Our previous blogs, however, focused on ways of making new construction projects more efficient. What about the existing buildings across the country? This week, we’re looking at the increasing calls by architects worldwide to “renovate, retrofit, and reuse” existing buildings in order to meet carbon reduction goals.

Improving What We Already Have

The US Building Stock – Why It Needs to Get Better

In order to hit the global greenhouse gas (GHG) emission target that we talked about in the previous blog and avert a climate disaster, the American Institute of Architects (AIA) argues that existing buildings cannot be ignored.

According to an AIA study, “America’s commercial building stock comprises some 6 million buildings, totaling around 90 billion square feet, almost half of which are more than 40 years old.” Unsurprisingly, the millions of 40+ year old buildings use a lot more energy to run than the newer ones, which is mainly why existing buildings are responsible for nearly 40% of our annual GHG emissions.

Architecture 2030, a major advocating force behind the US’s carbon reduction efforts, says in order to achieve the carbon targets set by the Paris Agreement (which the US recently rejoined), “a significant increase in the rate and depth of existing building energy efficiency renovations…is required.”

The Rocky Mountain Institute, a nonprofit research and renewable energy advocate group, takes things a step further than the AIA and says hitting required carbon targets means retrofitting nearly half of all (not just commercial) buildings in the US to zero emissions by 2030.

“Essentially, every building we touch over the next ten years, and we likely need to touch about 5 million buildings per year in the US, needs to be brought to zero emissions in a way that is both cost-effective and supports decarbonization of the grid.”

Reusing existing buildings isn’t a new concept, but it’s been gaining popularity over the past few years as businesses, nonprofits, and local governments have stepped up their carbon reduction efforts.

AIA’s California chapter says “Retrofitting, renovating, adapting, and remodeling existing buildings accounted for almost half of U.S. architects billing in 2018, but we are still tearing down perfectly good, functional buildings, with many years of life left in them. And when we do renovate, we aren’t reducing operating emissions as much as we need to.”

So here is a summary of the AIA’s six “guiding principles” for architects:

Make the project team’s reasons for retrofitting explicit, and develop clear goals to express them. Architects who can frame a renovation in terms of economic and social objectives as well as resource conservation are more effective advocates for sustainability while adding value to their service. From a social justice perspective, retrofitting puts proportionately more money into the workforce instead of into the walls, keeping dollars in the community and sparking the local economy.

Many older buildings have good passive bones and were designed with vernacular strategies for comfort. Thick masonry walls mitigate diurnal temperature swings, for example, and tall double hung windows allow rooms to self-ventilate. Such technologies create opportunities for lower carbon design. To get the most from passive systems, you may first need to restore them. For example, reopen sealed clerestory and operable windows to activate a cooling chimney effect, repair a radiant perimeter heating system, remedy site and roof drainage to keep walls dry (and therefore more inherently insulative), and monitor for areas where

3. Prioritize the Most Effective Interventions

Start with a thorough analysis of what you’ve got: What is your building, and what are its opportunities, issues, and problems? Then you will want to target your upgrades. Rather

than fixing everything, look for places of major heat loss and fix those. Using fewer materials generates fewer emissions—and reduces costs, too. What could you manage without? Consider the building as a whole system, including the potential for on-site renewable energy. A building envelope and mechanical, electrical, and plumbing (MEP) upgrade, combined with effective control systems and reduced plug loads, can bring an ordinary building surprisingly close to net zero energy.

In addition to more efficient operations, which the majority of sustainability paradigms focus on, reducing embodied emissions is essential to success. (Embodied carbon is the sum of all the greenhouse gas emissions mostly carbon dioxide resulting from the mining, harvesting, processing, manufacturing, transportation and installation of building materials.)

Savings in embodied emissions are immediate and can be achieved by reducing the use of materials overall—for example, by minimizing the material needed to retrofit a building, and by using low-carbon materials for remaining needs.

Conduct a hazardous materials inspection at the outset of the project. Some materials, such as asbestos in flooring, may be safely encapsulated and left in place. Others, such as lead, will need to come out. And now that health is on the project’s agenda, look for ways to follow through as you select new materials.

The value of an existing building lies in its ability to adapt to new uses. Think in terms of loose fit – How can your project achieve its goals so that the building remains adaptable? Can materials and assemblies be designed for reuse? Designing for flexibility extends the life of the building, and provides future generations with their own chance to retrofit.

The project designers for Washington D.C.’s Mundo Verde charter school needed to take the above six principles into account when the school was assigned a shuttered 90-year-old brick building to renovate for its new home.

The award-winning 47,000-square-foot revitalization project, which included a new 11,000-square-foot annex, “exemplifies environmental stewardship through site repair and reduced resource consumption,” according to the AIA.

The finished project used 97% of existing structural materials, and finishes—including hardwood floors discovered beneath layers of carpet and tile—were reused whenever possible. For elements unsuitable for reuse on-site, the project diverted 75% of construction waste from landfill.

Designers ensured maximum water efficiency with a 25,000-gallon cistern on the roof for capturing irrigation and toilet flushing water- saving an estimated 300,000 gallons of potable water per year. And because a lot of water can run down the drain while children play with sensor-activated faucets, timed faucets were selected for more effective conservation under the circumstances.

Improving the millions of existing buildings across the United States is no small feat. But with the help of architects like you who can apply the principles listed above and advocate for sustainable improvements, it’s possible!

You are required to complete 5 hours of continuing education in Disability Access by the last day of your birth month this year!