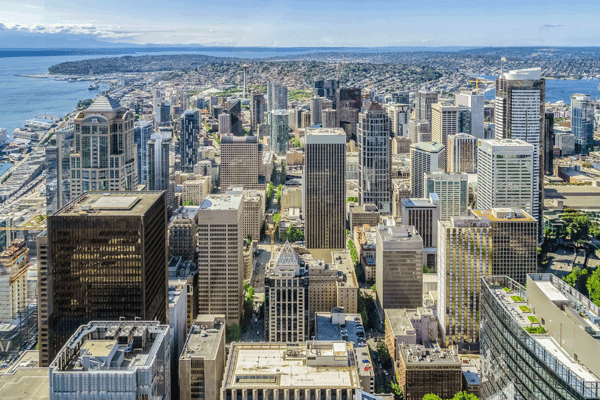 Research from the M9 project, a study estimating the impact from a magnitude 9 Cascadia quake, shows that high rises are at greater risk than previously thought. The Seattle Times reported the estimated effects of a magnitude 9.0 earthquake in the region stating, “the vast, sediment-filled basin under Seattle can magnify the type of ground shaking that puts high-rises at risk of collapse by a factor of two to five, which can trigger stronger surface effects than earthquakes in nearby California.”

As a result of the M9 findings, Seattle and Bellevue plan on revising their seismic construction standards for new buildings over 240 feet (20 stories tall). The new standard would require high-rises to be stronger than and sturdier than their predecessors without sacrificing cost.

There are also concerns regarding Seattle’s older high-rises. Many of which were constructed between the 1960s-90s, before the dangers of earthquakes were fully understood. They have a greater risk of damage and collapse because of their fracture-prone welded joints, which are suppose to secure the steel frame, and poorly-reinforced concrete supports.

Ron Klemencic, CEO of an engineering firm that helped design many of Seattle’s and San Francisco’s tallest buildings, expressed more concern with the water systems and older brick buildings than the high rises. High-rises are generally designed to withstand winds that exert more force than an earthquake shaking.  Klemencic’s company is headquartered in the Rainier Tower, despite its fractured-prone welds.
“That should tell you that we’re not particularly worried” he added.

Although the M9 results mean that high-rises aren’t as safe as previously assumed, people should not be concerned with the “Big One” happening tomorrow. They should take steps and be prepared for the future. Having a plan in place and working towards a solution later down the road helps increase the chance of solving the problem before its too late.