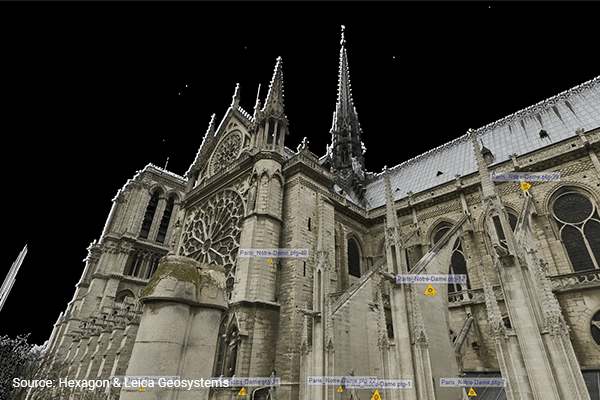 The task of restoring Notre Dame is underway after a fierce fire shocked Paris and the world on April 15th. The fire ravaged two-thirds of the roof and collapsed the cathedral’s spire. The main structure was saved after firefighters prevented the flames from spreading. French President Emmanuel Macron says he would like the church to reopen within 5 years but experts familiar with medieval restoration work said that type of timeline is unrealistic and could take around 2 decades to complete.

The restoration of Notre Dame in the upcoming years will be supported by modern digital technologies. Hexagon and Leica Geosystems has made available laser scanning data of Notre-Dame captured by the late Dr. Andrew Tallon. It consists of scans from fifty locations in and around the cathedral, with more than one billions points of data. The laser scans will help with the reconstruction of the church with an accuracy of 5 millimeters.

Andrew Tallon was an architectural historian and Professor at Vassar College, who adopted 3D laser scanning technology to measure buildings more precisely than traditional means could. Tallon with the assistance of Columbia’s Paul Blaer, was able to scan Notre-Dame Cathedral inside and out over a 5 day period back in 2010. They did this by using a Leica scanner on a tripod and positioned it repeatedly—to map out the dimensions for a digital three dimensional form.

Tallon’s interest in 3D laser scanning technologies goes back to 2001 when he helped produced the first laser scan of Beauvais Cathedral using one of the first Cyrax laser scanners. Nearly 10 years later, he was one of the first to use Leica ScanStation C10s to produce a high-density scan of Notre-Dame. The Leica C10 helped workflow to be more productive with sophisticated new functions and advances in cloud-to-cloud registration that made scanning much faster. Speed on the project was important in the fact that the cathedral in Paris is visited by approximately 13 million visitors per year. Scanning the cathedral with an area of 4,800m2 had to be to a minimum so that the daily liturgy and tourists were not disturbed.

“This type of work simply would not have been possible before the 3D laser scanner. Manual measurement would have required extensive scaffolding and months of work to accomplish—not to mention the inevitable errors due to imprecision,” Tallon stated in a global magazine of Leica Geosystems.