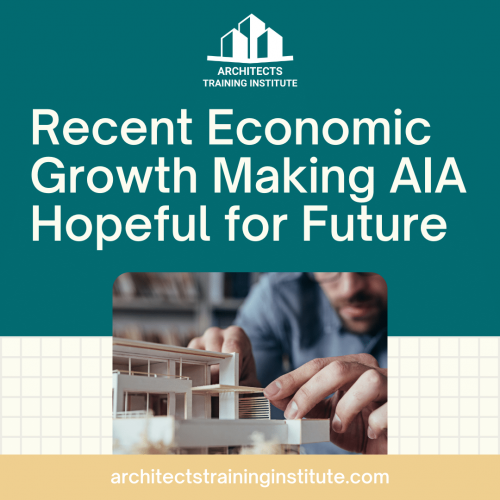 In our last blog, we looked back on how 2020 affected multiple sects of the architecture industry: from licensing to project demand.

This time, we’re looking forward by condensing this lengthy American Institute of Architects (AIA) report. In our report summary, we’ll cover what this year’s economic recovery means for future construction spending, some challenges the AIA expects the industry to face, and where architects should focus their efforts in the next few years.

The US economy (GDP) grew by 6.4% in the first quarter of this year and is expected to grow 6.5% in the second quarter. According to the AIA, these gains are creating optimism in the outlook for construction spending during the remainder of this year into 2022.

Challenges from a strengthening market

While momentum is building behind most nonresidential building sectors, there are several potential potholes on the road to a complete construction recovery.

After years of riding below targeted inflation levels, easing pandemic fears has prompted consumers to tap into their substantial savings and make up for deferred spending. As of the second quarter of this year, consumer prices are growing at a 4% pace compared to the prior year. Producer prices have accelerated even faster, increasing almost 6% in the second quarter.

Economists are increasingly divided as to whether we are in a temporary inflation bubble or the beginning of a new period of structural inflation.

Despite increasing vaccination rates and the economy being “open” again, there is still an ongoing disruption in global supply chains that has created substantial shortages for many construction materials, including softwood lumber products, metals, and energy products.

There seems to be no single reason for the myriad of issues affecting global supply chains. The AIA theorizes that the suddenness of the early 2020 lockdowns convinced many manufacturers that demand would be depressed for a long time. Then, in the industries where demand came back sooner and stronger than expected, it was difficult to bring back workers who hesitated to return to work because they were worried for their own or their family’s safety.

Generally, supply chain challenges are “fixed” when high prices reduce consumer demand and encourage producers to increase supply. However, many companies have witnessed the inherent liabilities of global supply and may restructure their production processes to bring some output closer to home where they are less vulnerable to global disruptions.

National housing prices have been growing at a double-digit percentage pace since late last year with no sign of slowing down. The May 2021 S&P CoreLogic Case-Shiller house price index showed a 16.61% one year increase, the highest annual rate of price growth in the almost 35 years that the index has been reported. While market conditions are certainly different now—underwriting standards are much tighter and households on average have much higher levels of home equity—there are limits to how much house prices can grow relative to household incomes before a correction occurs.

Despite healthy growth in the number of payroll positions recently, there are still 6.5 million fewer payroll positions now, and the national unemployment rate is almost 2.5 percentage points higher than before the pandemic. The AIA says that should point to a labor market with significant excess supply. However, recent figures suggest otherwise.

The most recent Job Openings and Labor Turnover report from the U.S. Department of Labor indicated that even with almost six million new hires in May, there were still over nine million open jobs out of a total employment base of over 150 million workers.

The construction sector is following a similar pattern. There are about 7.5 million workers in the industry, and the unemployment rate is 7.5%. Still, after hiring over 300,000 workers in May, there were still almost as many unfilled job openings in the industry.

According to the AIA, in spite of the emerging evidence of a strong design and construction recovery, there are other factors that could potentially produce growth. As well as the need for additional building space, architecture firms are already reporting growing demand for retrofitting existing buildings, particularly in light of post-pandemic concerns. Also, the bipartisan negotiations for an infrastructure program may supplement the existing strong demand for building activity.

Even prior to the pandemic, architecture firms were reporting that on average nearly half of their billings were from renovations, rehabilitations, retrofits, additions, and historic preservation projects. This was before concerns developed regarding how buildings could be made safer with heightened health concerns.

A June 2021 AIA survey of architecture firms reported that almost a third of firms indicated that work on existing buildings increased at their firm as compared to pre-pandemic levels, and over half indicated that these projects remained at about the same level. Only 13% of firms reported a declining share. Somewhat surprisingly, building sectors where firms saw the greatest gains in retrofitting were manufacturing and distribution, multifamily residential, and many of the key institutional building types (healthcare, education, corrections, government). Facilities that saw declines in retrofit activity were largely concentrated in the commercial category (retail, lodging, travel and tourism).

It’s not passed yet, but there appears to be growing bipartisan interest in passing a massive infrastructure spending bill.

According to a White House fact sheet, “the Plan makes transformational and historic investments in clean transportation infrastructure, clean water infrastructure, universal broadband infrastructure, clean power infrastructure, remediation of legacy pollution, and resilience to the changing climate.” Touted as a $1.2 trillion program over a five-to-eight-year horizon, about half of this figure comes from expiring existing programs that are expected to be renewed, and the other half from new spending.

The construction industry would be a major beneficiary if such a program is enacted, according to the AIA. However, most of the funding would go to engineering and public works construction firms, with a likely modest impact for architecture firms.

Although it will take a while for the recent burst in design activity to translate into construction spending, the AIA thinks the next few years will generate a healthy growth in construction activity. The commercial construction sector still has a way to go before it reaches pre-pandemic spending levels, but the AIA says this is expected to happen by the end of 2023.

How are you feeling about the architect and construction industry’s future outlook? Are your projects still residential/retrofit focused? Let us know your story by emailing us here!