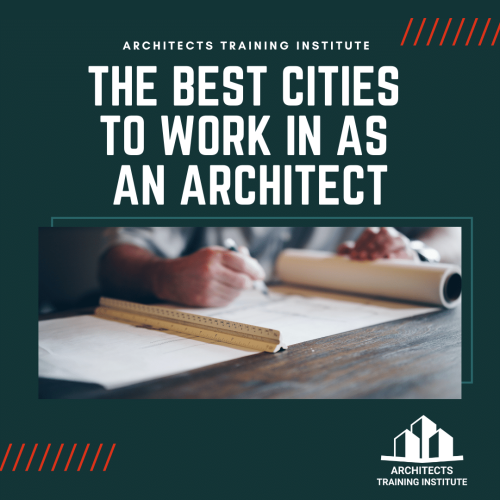 Pursuing a career in architecture is possible virtually anywhere in the world. The question is, however, would just any place be able to offer you opportunities for advancement? Would it offer you a chance to grow as a professional? To become the best of the best? Sadly, the answer is no. The best cities to work in for architects are only a few, and if you genuinely wish to flourish, you should seriously consider starting a life for yourself in one of them. They are located all over the globe, so sit back, relax, and start contemplating where to begin anew – in a professional kind of way.

Best Cities to Work in for Architects Seeking Financial Security

The US, as a whole, is considered the top country in terms of salaries in the field of architecture. With that in mind, it’s not unusual that the best cities for architects seeking financial security would be located precisely here – in the States.

California is considered a state light years ahead of many others. Its architecture is no exception, and San Francisco, as a city, is an actual work of art. It features buildings and structures so unique – something that doesn’t exist anywhere else!

The most prominent landmark is none other but the glorious Golden Gate Bridge. Speaking of this famous bridge, people have even gone as far as to call it the modern age World Wonder! That’s how well it was designed and built!

San Francisco’s architecture is a perfect mix of old and new. On one side, we have homes dating back to the Victorian age. While on the other, we’ve got modern skyscrapers reaching the sky.

In terms of salaries, an architect can expect to make, on average, $100,000 per year here. Of course, top-notch professionals out there have a chance of earning a significantly higher income. It’s merely a matter of experience.

NYC is among the top places to start your architecture career. The city that never sleeps boasts of some of the world’s best design firms – firms constantly looking for building design experts, which makes making a name for yourself in the Big Apple something you can do.

New York City can offer architects willing to work there quite competitive salaries, too. Most are averaging $95,000 a year, although there are exceptions.

The city’s architecture is widely recognizable and features a range of styles, including Art Deco, Art Nouveau, and Gothic Revival. Furthermore, we cannot but talk about New York without mentioning its famous buildings. People from all over the world, even those that have never paid a visit to the city, have heard of the mesmerizing Empire State Building and One Trade Center.

If you haven’t figured it out already, NYC is the city of art. In part due to its numerous art exhibitions and a variety of architectural styles present. With all that said, as an architect working in NYC, it’s only the sky that should be your limit!

Being one of the oldest cities in the States, it’s only natural Boston would also make it to the list of best cities to work in for architects. It’s that ideal blend of the traditional and contemporary styles that make it an exciting place to base your career from.

Boston has also righteously earned its spot among the top 10 US cities with the highest pay across all fields. It ranks high in the field of architecture, with the average annual salary falling somewhere around $96,000.

The city of Boston is a place with old bones and soul, but with a modern twist to it. It does have its fair share of skyscrapers, along with some of the historical landmarks. Known for the quality building design in the area are The Berkeley Building (or the Old John Hancock Building) and the Prudential Tower.

Best Cities to Work in for Architects Abroad

Wishing to pursue a career in architecture somewhere outside the US? Perhaps, you’ll find appealing one of the places we are about to introduce you to!

Ever heard of Burj Khalifa? If you’ve got even a remote sense of the architecture world, chances are you have. After all, it’s the tallest building in the world, and it’s located precisely in Dubai! The fact that the island of Dubai itself was entirely man-made is fascinating, to say the least. Considering the stated, it’s no wonder a growing number of architects are looking to it for career opportunities. Especially those wanting to work on the kinds of projects that have never been seen elsewhere.

An architect working in Dubai can expect to make around $70,000 per year. Again, there are exceptions to be made, especially if they are in charge of designing overly luxurious spots like the Cayan Tower and Burj al Arab.

The capital of Great Britain is a city of ancient architecture. Its famous landmarks, such as the London Bridge, Big Ben, Buckingham Palace, and the Westminster Abbey, are all more than a hundred years old, with some counting even a couple of hundreds. This city portrays a variety of styles, starting from Georgian and going all the way to Post-war Modernism and Art Deco.

London is considered an important financial center in the whole of Europe, and even the world! Plenty of renowned architecture companies are based in the city, making it full of work opportunities. Architects’ salary in London easily reaches $90,000 a year, with the tendency to be even higher in the future.

What Now, Where to Go?

We’ve only had the time to mention a couple of the best cities to work in for architects, but there certainly are many more of those with ample opportunities for professional growth. Cities like Hong Kong, Singapore, Amsterdam, and Toronto, for instance, have all proved to be architect-friendly. In the end, deciding upon the place to start anew as an architect isn’t something you’ll have an easy time doing. What you can do is research your options further and go with the one that, in your gut, feels the most natural.