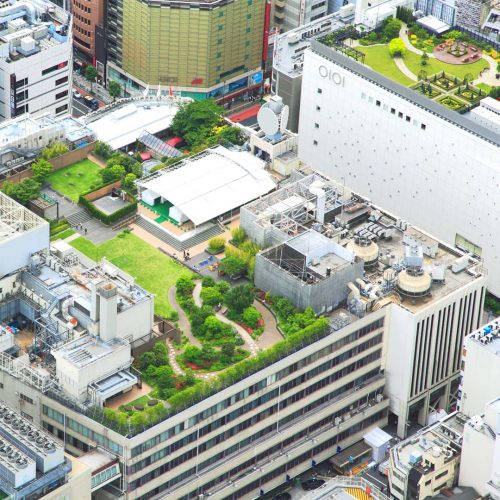 Roofs are often neglected spaces on a building—useful for keeping out the elements, but not much else. However, there is a new trend in roofing, which originally became popular in Europe, that is now taking hold in the U.S.: green roofs.

Compared to traditional roofs, green roofs have many benefits that increase the efficacy of the under-utilized space with few drawbacks. “Green roofs last longer than conventional roofs, reduce energy costs with natural insulation, create peaceful retreats for people and animals, and absorb storm water, potentially lessening the need for complex and expensive drainage systems. On a wider scale, green roofs improve air quality and help reduce the Urban Heat Island Effect, a condition in which city and suburban developments absorb and trap heat. Anyone who has walked across a scalding parking lot on a hot, summer day has felt one effect of an Urban Heat Island” (howstuffworks.com).

The primary challenge in creating green roofs is the initial cost. There are multiple design considerations that must be made, including the load bearing capabilities of the structure, drainage, irrigation and root protection barriers. These considerations do increase the cost per square foot drastically, however, the benefits are recouped quickly.

Roof membranes last longer (up to twice as long) than traditional roofs, because they are protected from UV light and harsh weather. Surface temperature stays more stable and provides extra insulation, increasing the efficacy of internal atmosphere controls. One Canadian study found that even a six-inch extensive green roof can reduce summer energy demands by 75 percent (EPA).

Green roofs also help cool air temperatures, through a natural process called evapotranspiration, which occurs as water evaporates from plant leaves. Widespread use of green roofs in urban areas can help reduce the urban heat island effect, as well as cut down on city wide energy usage. They can also help reduce stress on sewer systems, by absorbing rainwater runoff that would otherwise have ended up flowing down gutter systems and into the streets and sewers.

Overall, the benefits seem to far outweigh the costs—not only do green roofs provide benefits for the building and the environment, they add beauty to otherwise dreary scenery. To learn more about green roofs, check out this article from the EPA.