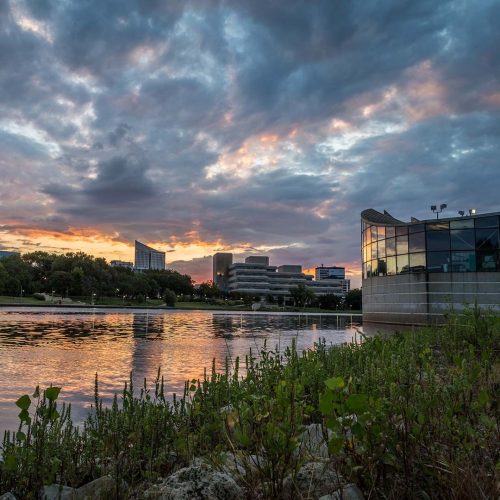 Frank Lloyd Wright is getting a new building in Wichita, Kansas…in spirit, at least.

The building will serve as the new home for the Fundamental Learning Center, which is both a school and a public education center dedicated to serving students with dyslexia, their families, and their educators. You can learn more about their work and view images of the building plans in this article and from their website.

Co-founder and executive director Jeanine Phillips told the story of the new center building’s connection to Wright to The Wichita Eagle.

“Her father, former WSU treasurer Larry Jones, told her about a juvenile cultural center that Wright designed for WSU in 1953.” The building was never built, and the plans were found languishing in a maintenance shed. “Late WSU president John Bardo approved the center taking the plan.”

Craig Rhodes of GLMV Architecture served as the designer for the new center. He drew inspiration from both the recovered WSU plans and Wright’s architectural principles, claiming he doesn’t “think anyone can copy [Wright’s] work.” He hopes that the final plans reflect their inspirational starting point, but also that the building “will stand on its own as a piece of unique architecture.”

Coincidentally, after the site for the new school had been chosen, Phillips and other board members visited Wright’s Allen House in the College Hill area of Wichita. There they found a drawing for another house Wright had designed which hadn’t been built in Wright’s chosen location. Wright’s desired site for the house? Across the street on the same intersection they had already chosen for the new building.