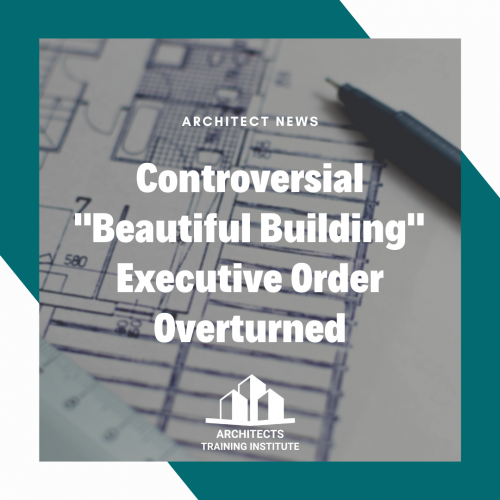 What was in the order, and why did President Biden overturn it? Here’s a quick summary.

Back in February 2020, then-President Trump proposed an executive order called “Make Federal Buildings Beautiful Again” after calling many modern federal buildings “uninspiring” and “just plain ugly.” The order was a response to the postmodern “Brutalist” trend that became popular in the 1950s.

The “meat” of the order established the Council on Improving Federal Civic Architecture which would do everything in its power (short of outright mandating) that all new federal buildings in Washington DC and new federal courthouses elsewhere follow a “classical” architecture style. “Classical” is somewhat loosely defined in the order as “including Neoclassical, Georgian, Greek Revival, Gothic and other traditional styles.”

The new council still currently includes the Commissioner of the General Service Administration (GSA) Public Building Service, the Secretary of the Commission of Fine Arts, the Architect of the Capitol, and about twenty other people selected by former President Trump. But it’s likely that President Biden’s new executive order will disband this council at some point.

From the moment the order was announced, opinions within and outside of the architecture world seemed relatively split. The National Civic Art Society (NCAS), who acted as one of the main supporters of the order, said “Americans have long understood that classical architecture is not only beautiful, it embodies the key values of our representative government.” The NCAS backed their support of the order by citing a Harris Poll that surveyed a “diverse” group of 2,000 Americans. According to this particular poll, 72% said they preferred “traditional design” over “modern design.”

Other organizations saw the order very differently. The American Institute of Architects (AIA) said they “unequivocally oppose the executive order,” and they “do not, and never will, prioritize any type of architectural design over another.”

Back in February, the AIA’s EVP/Chief Executive Officer Robert Ivy told NPR that the order doesn’t account for today’s office buildings, which need to be efficient and equipped for emerging technology and security features. “In the 21st century, we’re very different people from the people who popularized Greek Revival architecture in the 19th century, as beautiful as it was,” he says. “To try to force-fit new systems in old forms is difficult to do, inefficient, and is not who we are today.”

The nonprofit National Trust for Historic Preservation said “We strongly oppose any effort to impose a narrow set of styles for future federal projects based on the architectural tastes of a few individuals that will diminish, now and for the future, our rich legacy of federal architecture.”

But now that the executive order is overturned, this all doesn’t matter anymore. Right? “Not necessarily,” says Bloomberg.

Although organizations like the AIA are applauding the Biden administration for removing the order, the previous administration took action to “determine who gets to decide what federal buildings look like” in the years ahead.

The day after President Trump signed the order, he named four new appointees to the U.S. Commission on Fine Arts (CFA), the independent federal agency that oversees design and aesthetic decisions in the nation’s capital. All four of the new commissioners, who will serve four year terms, are “deeply steeped in yesteryear’s European art forms.” Along with the three current commissioners, who were also appointed by Trump, all seven members are now white men. This is a departure for a commission that in 2019 included three women and two African Americans.

“The buildings we create and the spaces we create will stand to represent who we are as a society today for future generations to have a better understanding of who we were,” says R. Steven Lewis, former president of the National Organization of Minority Architects. “If Black architects are not included in offering some of that work, then we could, as has been the case in the past, be written out of history, and there would be no account of our lens through which we see the society and the world.”

Architecture critic Philip Kennicott says President Biden should remove the current CFA members, and replace them with a more diverse group that will bring a “wide and spirited range of aesthetic viewpoints to the commission’s monthly meetings.”

The AIA is also advocating for Congress to pass the Democracy In Design Act, which proposes codifying the GSA’s Design Excellence Program principles into statute – ensuring the federal government maintains neutrality on architectural styles.

Do you think there should be a mandated style for all federal buildings? Let us know on social media!

You are required to complete 5 hours of continuing education in Disability Access by the last day of your birth month this year!